Miami Hurricanes Football Events Near You 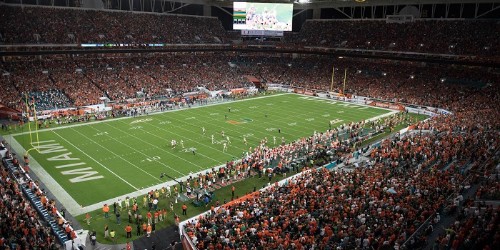 After an up and down season with a 7-5 record in 2021, the Miami Hurricanes look to get back to be one of the prominent college football teams in the country in 2022. With Mario Cristobal being announced as Head Coach of the team going forward, he looks to bring a team full of energy, speed and toughness in every game they go into. Come secure your tickets to a Miami Hurricanes game where they play at Hard Rock Stadium as they battle in the ACC and in the rankings to get to a bowl game at the end of the year. There is nothing like a Miami football game, so come join the atmosphere today!