Miami Open Tennis Events Near You 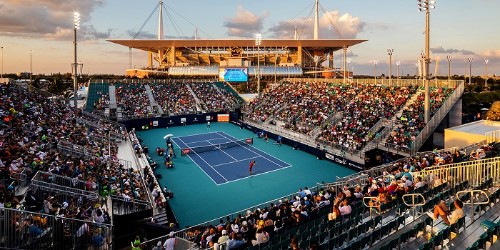 2023 Miami Open Tennis dates has been released and fans are expected to lineup to reserve a spot to the best-attended tennis tournament of all. Last Miami Open tennis was, again, a success, despite the absence of the no. 1 tennis player, Novak Djokovic. Fans got their complete doses of their yearly all-out tennis action! Spanish player Carlos Alcaraz got his first ATP Tour Masters 1000 title, defeating Casper Ruud to the finals and Iga Swiatek defeated Naomi Osaka and won the Women's Singles. 2023 Miami Open is back on its 38th edition at the Hard Rock Stadium, Miami Gardens Florida starting Marth 20th until April 2nd of 2023. Will top players, Djokovic and Nadal be back to the court to play in this tournament again? Find out! Get your 2023 Miami Open Tennis Tickets as early as today to get a significant markdown from the original pricing.