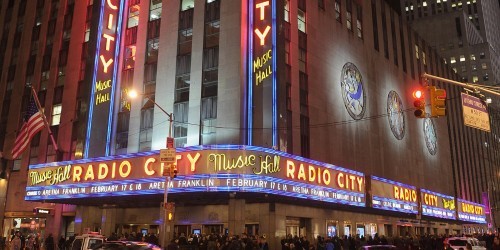 Radio City Music Hall is an entertainment facility located at 1260 Avenue of the Americas within Rockefeller Center in New York City's Midtown Manhattan district. It is the headquarters of the Rockettes, a precision dance group, and is known as "the Showplace of the Nation." The Radio City Christmas Spectacular is an annual Christmas theatrical production produced by MSG Entertainment, which also owns and maintains Radio City Music Hall. It has been a New York Christmas tradition since 1933, and it involves the Rockettes, a women's precision dance team. Radio City Music Hall has been on television game programs such as Wheel of Fortune and Jeopardy! The theater hosted Wheel of Fortune, which was on its inaugural road tour, for two weeks in November 1988.